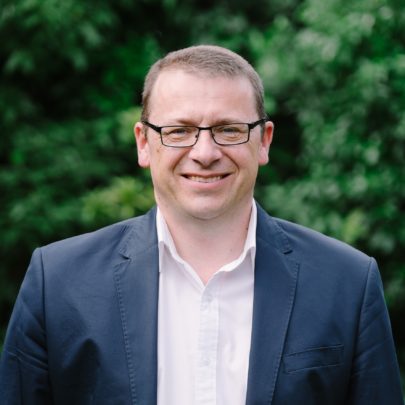 Chris studied Trombone and Piano at the Royal Northern College of Music in Manchester, from where he graduated in 1993 with an Honours Degree and a Professional Performance Diploma. Following study, he worked for several years as a freelance trombonist with orchestras such as the BBC Philharmonic, Royal Liverpool Philharmonic, Opera North, Halle Orchestra and the London Festival Orchestra and in session work for BBC and Granada Television. For many years Chris also worked as Senior Tutor in Brass for the Cheshire Youth Orchestra and taught Brass to students in various high schools in Manchester and Cheshire before making a permanent move into education. In 2008 Chris moved to New Zealand and is now Head of Music at Burnside High School.

Born in Christchurch, Michael studied piano with several teachers, including Ernest Empsom, Irene Lassen, Iola Shelley and Maurice Till. After taking his BA in English at Canterbury University, Michael taught in primary schools while finishing a B Mus degree in piano performance. Participation in various music competitions met with some success, the highlights being placed twice as runner up in the Auckland Star piano concerto contest, playing concertos by Beethoven and Cesar Franck. He has performed other concertos by Gershwin, Haydn and Chopin with local orchestras, including the Christchurch Youth Orchestra, Da Capo Orchestra  and the Christchurch Symphony Orchestra. On the lighter side, he has played the Warsaw Concerto on more than one occasion for the Proms Concerts. In 1985 he took over from Clifton Cook as head of music at St Andrew’s College. Michael kept up his solo playing and made regular appearances in the Arts Centre Friday lunchtime concert series in the Great Hall during this period.  He recorded as a national recording artist for Radio New Zealand at this time too, although accompanying has been his focus in recent years.  Accompanying vocalists and instrumentalists is an aspect of piano playing he enjoys, finding it both interesting and challenging. At the end of 2009, Michael resigned from his head-of-department position at St Andrew’s College after thirty years with the school. This has left him with much more time for piano playing, while still doing some teaching and group direction at three Christchurch secondary schools and serving as assistant musical director at the city’s Catholic Cathedral.” 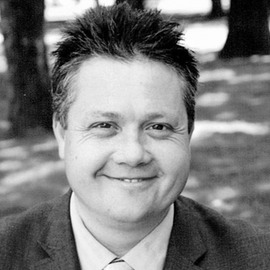 Carlo Ballara trained as a violinist, at Wellington Conservatory and Victoria University, then as a postgraduate in Italy at the Accademia Chigiana, and in London at the Guildhall. In 1997 he moved to Europe. There he was a member of the Camerata of London playing as assistant concertmaster. He also free-lanced with many orchestras in London, Italy, and Switzerland. This included acting as Concertmaster and playing as soloist. Whilst in London he taught the violin at his own studio and at many prestigious institutions including: Swiss Music School, Glendower and Redcliffe Preparatory Schools. He entered some thirty students a year for ABRSM exams, and notable results include 138 and 142 for Grade 8. Carlo Ballara returned to NZ in 2012 and plays in the First Violins in the Christchurch Symphony Orchestra. He teaches at Medbury, Westburn and Paparoa Street schools, tutors in the Specialist Music Progamme at Burnside High, and one-to-one from his studio in Papanui. Carlo is now accepting violin students, from beginners of all ages, to postgraduate students.

After graduating from the Royal Scottish Academy of Music and Drama, Lois carved a niche for herself as an accomplished performer of early and contemporary music. In 2000, her musical life changed completely when she appeared as a flower maiden in Simon Rattle’s BBC Proms performance of Parsifal, and in so doing discovered a passion for opera. This prompted her to return to study at Birmigham Conservatoire attaining a Postgraduate Diploma specialising in opera and she has performed regularly at opera galas, recitals and in oratorio here in New Zealand ( where she became a Citizen in 2017), and in Europe.
Lois particularly enjoys maintaining her Scottish connections and has worked regularly with Scottish Opera and Edinburgh Grand Opera. She was a founder member of the Dunedin Consort and sang frequently with the John Currie Singers, Ludus Baroque and the Scottish Early Music Consort. As a professional chorister she sang for several years with the Netherlands Radio Choir, Nationale Reisopera, Choir of the Enlightenment and European Voices with whom she toured in Simon Rattle’s productions of Idomeneo (Salzburg Festival, Lucerne Festival) and Peter Grimes (Salzburg Festival).
Lois is also a passionate and dedicated teacher working from her home studio. She has taught voice at the University of Canterbury and Pettman Junior Academy and currently proudly teaches ChristChurch Cathedral Choir’s boy choristers at the Cathedral Grammar School coupled with a day of itinerant vocal teaching at Columba College. During her time teaching at the University of Canterbury, Lois was also a member of the lecturer/student Baroque ensemble Il Raccolto and co-founded the early music ensemble Canterbury Baroque and the lutesong duo Tirsi. She also premiered several postgraduate student compositions as part of the University’s concert series. Lois maintains a busy performing schedule and appears regularly as a soloist with several South Island choirs and orchestras. She has been a regular artist at the New Zealand International Early Music Festival in Dunedin, and co-founded a touring opera company – The Little Box of Operas – with whom she played the role of Dido in 2016. Early in 2018 her band, Café Operana, recorded their first album with John Egenes and Mike Holland which they launched in 2019. In December 2018, Lois founded Opera Here, and they performed twelve concerts in their first eleven months.
Community engagement is important to her, and over summer 2017 Lois organised 38 concerts at Iona Church, Port Chalmers, featuring local and visiting artists from as far away as Bluff and Auckland.
Lois is also a freelance writer and contributes to a variety of publications here and in the UK.

John studied clarinet at Victoria University, Wellington and a number of scholarships and competition successes enabled him to continue his studies in London with John McCaw, at the time Principal Clarinet in the Philharmonia.  After graduating from Goldsmiths College, John held the post of Sub-Principal Clarinet in the Orchestra of Opera North, Leeds, for twenty years.  During that time John taught clarinet at Huddersfield University and was involved in numerous education projects through Opera North.  John returned to New Zealand with his family in 2011 and is currently playing with the Christchurch Symphony Orchestra, the New Zealand Symphony Orchestra, teaching the clarinet and also running a successful woodwind repair and piano tuning business.  In his spare time, John is a keen laser sailor, cyclist, and gardener. 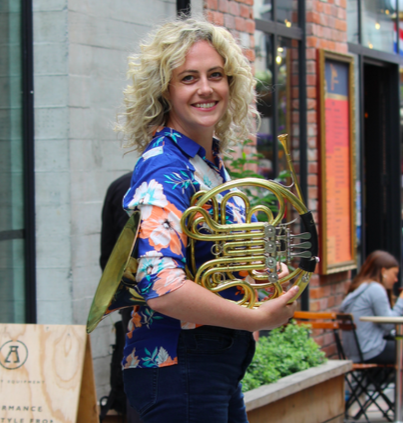 Emma Eden is a proud Kiwi who began her musical life in Timaru playing in the Waimataitai School brass band. After graduating with first class honours in Wellington Emma then went on to study at the Banff Centre for Arts and in Toronto, Canada.
More recently Emma won a Winston Churchill Scholarship to study in Berlin with members of the Berlin Philharmonic.
In 2010 Emma won the position of principal 3rd horn in the Auckland Philharmonia Orchestra, a position she enjoyed for over ten years.
Emma has been lucky to play in all of New Zealand’s professional Orchestras as well as the Melbourne and Sydney Symphony Orchestras and has also appeared as a soloist with many orchestras including the Auckland Philharmonia.
A founding member of ACE Brass Trio, Emma loves touring NZ sharing new music and doing community outreach workshops. Emma is passionate about music education and it’s ability to make positive and meaningful changes to our community.
In 2020 Emma was delighted to take up the position of principal horn in the Christchurch Symphony Orchestra. Emma is loving living back in the south island and is really passionate about contributing as much as she can to the lively Christchurch music scene.
Outside of music Emma enjoys gardening and spending time with her wife Liz and young daughter Maggie.

Karl Margevka was born and raised in Ukraine. He started to learn the Trombone at age of 12. Karl graduated from Kiev Glier’s State College of Music and Leningrad (now Saint Petersburg) Rimsky-Korsakov State Conservatoire. In 1983 Karl was appointed as a Principal Trombone with the National Symphony Orchestra of Ukraine and played there until his departure to New Zealand in 1995. With NSOU he was touring extensively as well as making recordings for labels such as Naxos and Marco Polo. In 1995 Karl joined the Christchurch Symphony Orchestra as Principal Trombone.

Cain Hood is a performer, composer and engineer based in Christchurch, New Zealand. He received his musical training at the Christchurch Polytechnic Institute of Technology Music Arts School and the Music and Audio Institute of New Zealand.  While at CPIT Musical Arts School,  Cain studied Jazz Performance, Theory and Composition, and discovered a passion for Jazz Combo Performance. This has led to Cain directing the SMP Jazz programme at Burnside High School where he works full time as Assistant Head of Music. Since 2004 Cain has been involved in the Christchurch music community, performing, organising or working behind the scenes at countless events in a wide range of genres and styles. The foundation of knowledge gathered from this has been fundamental in the creation of a programme that is focused on developing a well-rounded student who is able to learn, evolve and grow throughout their musical path.